We want to know:

The best cooking method to give gluten-free french toast that classic tender-but-chewy inside with a crisp and delicious golden-brown outside.

Cook Time: 3-5 minutes per side 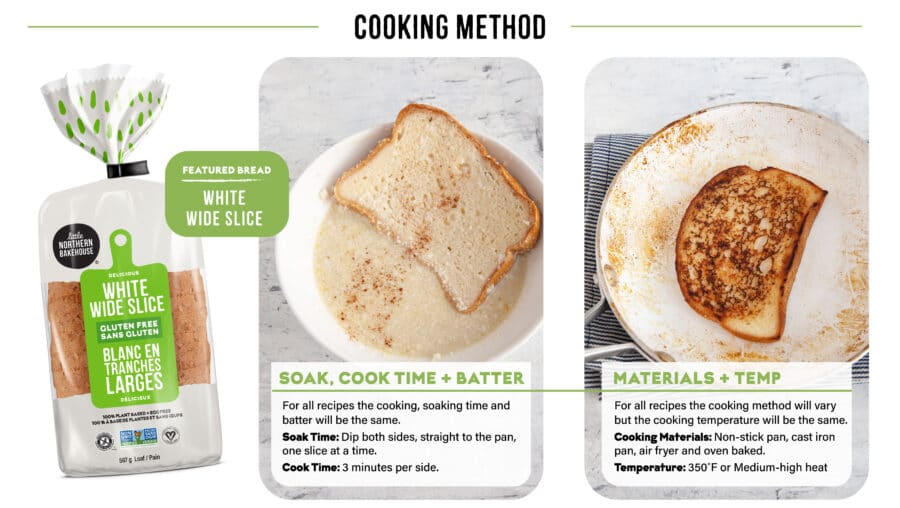 How did we judge which cooking method is most successful at achieving the classic french toast texture with gluten-free bread? We used our senses! We compared how well it browned (visual), how crispy it was on the outside and how chewy-but-tender it was on the inside (touch), how delicious (or not!) it was (taste), and how well the texture held up from pan to plate—and to fork.

We gave each category a score out of 5 for each batter we tested, then gave each batter an overall score. (And we’ll tell you what we loved—and what we learned—about each!)

How to Cook the Best Vegan French Toast

To determine the best way to cook gluten-free french toast, we tested four different cooking methods and scored them in 4 different categories:

Each eggless batter substitute will receive a score in each category out of 5—with 1 being the lowest score and 5 being a perfect score. 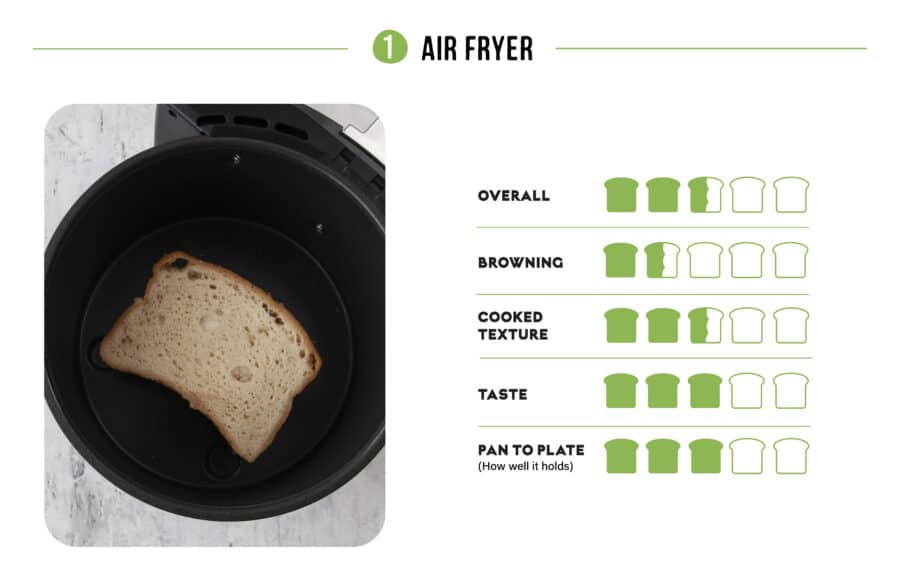 Air fryers are one of the trendiest kitchen appliances of the ‘20s so far. For those who have one, we wanted to know—can you cook vegan gluten-free french toast in the air fryer? We tested a batch of air fryer french toast to see how it stacks up to conventional methods. Before you get started, make sure to pre-heat your air fryer to 350℉. Then, lightly spray the inside of your air fryer basket with cooking oil, place your french toast into the basket, and air fry away! After 3 minutes, flip and continue cooking for another 3 minutes or until done. 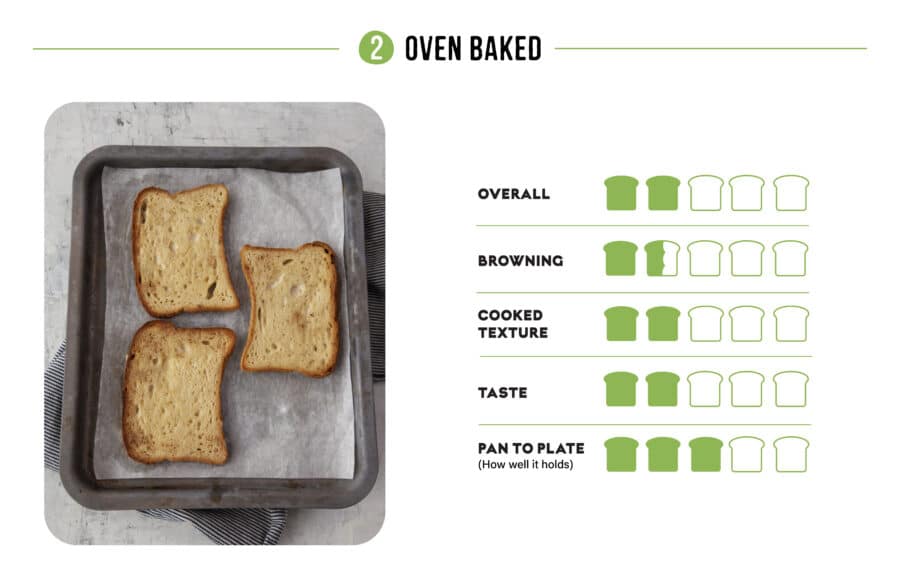 If you have a crowd to feed or your brunch menu has multiple dishes on the go at once, you can try baking your french toast. Simply lay your french toast out on a parchment-lined baking sheet and toss them in the oven at 350℉. If you’re using a toaster oven raise the temperature by at least 25℉. Bake the french toast at 3 to 5 minutes per side. It’s important to note that baked gluten-free vegan french toast won’t brown in the same 3 to 5 minute timeframe as well as it does in a non-stick or cast iron pan. You can solve this by increasing your cooking time or finishing them on the broil setting for a few minutes. 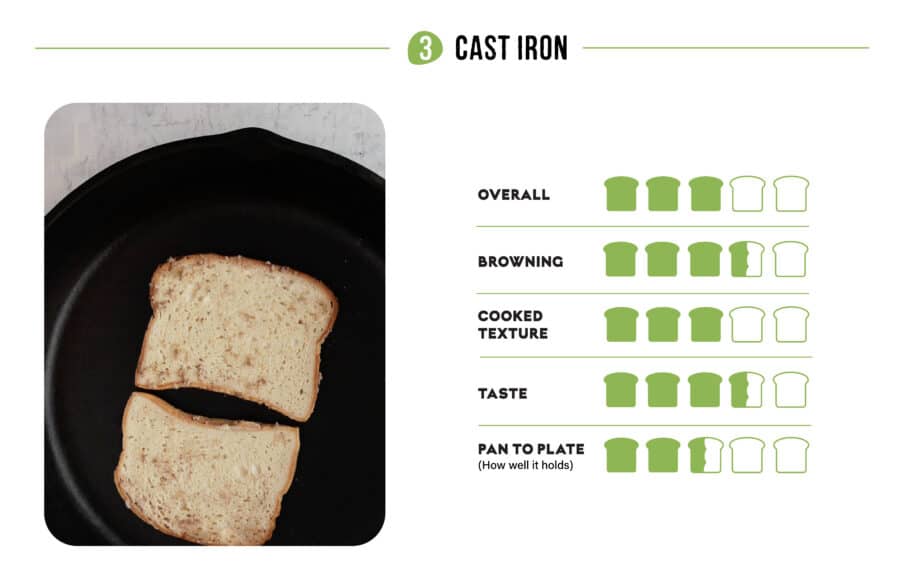 For the more skilled chef (or well-seasoned home cook!), you can go heavy-duty and use a cast iron skillet. This method requires a little bit of finesse, read on to find out why. 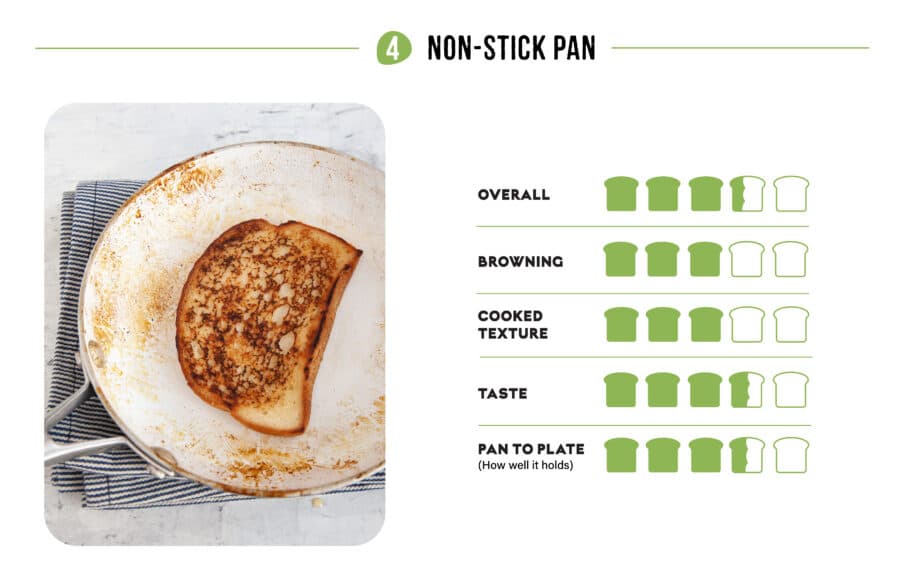 What is the Cooking Method for Gluten-free French Toast?

When it comes to making french toast, traditional cooking methods seem to be the way to go. Using a non-stick pan or cast iron skillet is the best way to get that classic crispy golden-brown coating with a soft and flavourful centre. These methods are ideal for whipping up a batch for weekend breakfast with your family as you can have a rotation of 2 – 3 slices in the pan at any time.

If you want to make a large batch of french toast in the most convenient way possible, then baking your french toast in the oven is the way to go. Baked gluten-free vegan french toast won’t brown in the same 3 to 5 minute timeframe as well as it does in a non-stick or cast iron pan, but increasing the cooking time per side can solve this easily. And since you would otherwise cook a few slices at a time to finish a larger batch, the extra time in the oven likely works out to a lower total cooking time—and with a lot less hands-on attention!

As for the air fryer? One of our air-fried french toasts actually folded into itself due to the vigorous force of the fan in the air fryer! This resulted in some interestingly shaped pieces of french toast! And—depending on the size and style of your air fryer—how many slices you can cook at once is limited to what you can fit in a single layer in the air fryer basket. But if you’re making french toast for one, or you like your french toast extra crispy, this could be the cooking method for you. Otherwise, stick to pan-frying and you’ll experience the joy of the real thing!

For more gluten-free resources, sign up for our monthly newsletter at the bottom of this page. Check out our other gluten-free test kitchen for more tips on making the best gluten-free french toast, and post your makes to Facebook, Instagram, and Pinterest. (Don’t forget to tag us!)